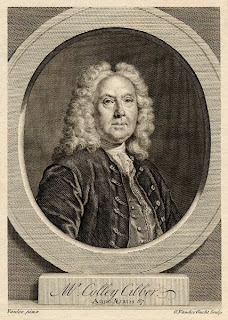 Colly Cibber [1671-1757] was the first in a long-line of actor-managers in the English theatre and pioneer of the truly personal autobiography, a work that appeared in 1740 under the title An Apology for the Life of Mr Colly Cibber, Comedian, and Late Patentee of the Theatre Royal, With an Historical View of the Stage During His Own Time, Written by Himself.’ (At that time the word ‘apology’ meant a statement in defence of one’s actions).

He made his name as an actor and dramatist with ‘Love’s Last Shift, or Virtue Rewarded’ (1696) in which he starred as the Frenchified fop Sir Novelty Fashion; fops were to remain his forte, entertaining his audiences with his portrayals of Lord Foppington, Sir Courtly Nice and Sir Fopling Flutter

He also adapted (or mutilated) many plays by other authors, including Shakespeare’s Richard III. His version – ‘The Tragical History of Richard III’ - which premiered in1700, remained the standard stage version until the 1840s. It was thought by many to be an improvement on the original, despite the fact that the first two lines of Richard’s most famous soliloquy – ‘Now is the winter of our discontent /Made glorious summer by this son of York’ – were excised. The role of Richard III made the name of the actor David Garrick and it remained the character for which he was most renowned. The theatrical term ‘break a leg’ is said to have come from this, Garrick being so transported by the role of Richard that he didn’t notice he’d fractured his leg.

Colly Cibber’s appointment as Poet Laureate was seen to be a political rather than artistic honour, and widely ridiculed by the likes of Fielding, Johnson and Pope. Some of his poems have survived but only in ‘bad verse’ anthologies.’ 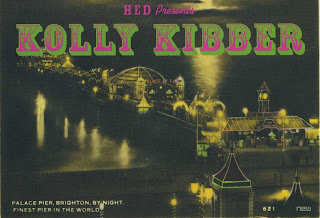 [Above]: The memory of Kolly Kibber is not lost in Brighton. This is an invite card to an art show at The Headquarters featuring work by Damien Le Bas, Delaine Le Bas, Cathy Lomax, Wayne Lucas, Alex Michon, Jimmy Pursey and Stella Vine. Date uncertain (in the last few years).

"Kolley Kibber" was the newspaper nom-de-plume for Fred Hale, a former gangster, who returns to Brighton to anonymously distribute cards for a newspaper competition and disappears, presumably murdered, at the end of the first chapter of the novel ‘Brighton Rock’ by Graham Greene.

The character of Kolly Kibber was a homage and an amalgam of Colly Cibber and Lobby Lud, a fictional character invented in 1927 by the Westminster Gazette, the name being derived from the newspaper’s telegraphic address (‘Lobby, Ludgate’). The newspaper would print details of which holiday resort ‘Lobby Lud’ (impersonated by member’s of the Gazette staff) was going to visit, provide a description of him and that day’s password phrase. Anyone carrying a copy of the newspaper could challenge "Lobby Lud" utter the password, and win some money.

The News Chronicle, Daily Mirror and Daily Mail all ran similar schemes. The Daily Mirror's "Chalkie White" continues to visit resorts, and the idea has been taken up by local radio stations and other media (often offering lesser prizes).

Guardian journalist Alan Rusbridger caught up with a ‘Chalkie White’ in1980, on the prom in . He wrote: ‘Each day a picture of Chalkie's eyes appears in the Daily Mirror and each day the Great British holidaymaker memorises them, together with the line he must say to claim the £50 prize. It is usually some such sentence as "To my delight, it's Chalkie White".

(He has a different version of the origin of this tradition: ‘Chalkie White comes from a distinguished tradition of mystery men, a British summer institution that began between the wars with the News Chronicle's Lobby Lud and was celebrated after a fashion in Graham Greene's Brighton Rock.’)